“I’m a girl” Lifebuoy’s latest media campaign has officially started with the goal of raising parents’ awareness of the importance of girls’ education with the message: “By education, Girls can be heroes.”

In a country where gender equality is still underappreciated, even when it comes to education, girls are not treated like boys, Lifebuoy has changed that.

Launching TVCs with the focus on the story of a girl overcoming her low self-esteem, raising her voice to read a poem which only for boys. The campaign is accompanied by singer-songwriter Shehzad Roy – who founded the educational non-profit Zindagi Trust.

A more special thing in TVCs, Lifebuoy changes the content of a poem that is a traditional work of Pakistani educational program written by author Jameeludin Aali.

In the original, the poem affirms the strength of the boys and encourages them to do anything in life. Therefore, the creative team invited the famous writer Zehra Nigah to rewrite this poem with the main character being a girl. 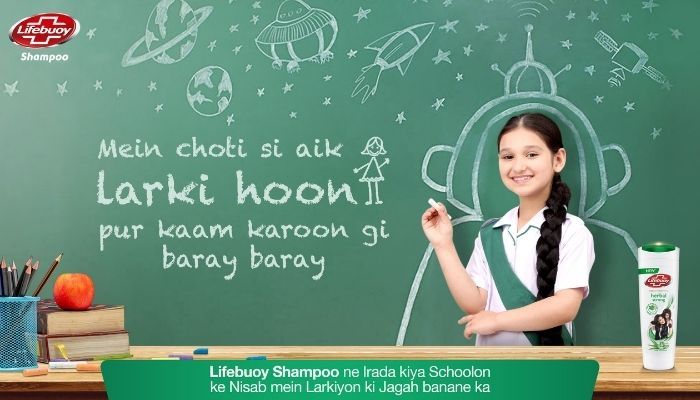 In the campaign’s TVC, the opening image of a little girl reads aloud the inspirational verse “I’m a little boy but I will accomplish big things in life”. However, she received giggles from her classmates.

That made her sad and told her mother: “The poem you were taught in class is only for boys”. In the end, the mother helped her revise the poem, thereby encouraging her to believe in the true strength of a girl. Thanks to that, the girl confidently performed the poem again, but with a proud new verse: “I’m a little girl but I will accomplish big things in life”.

TVC ends with a commitment from Lifebuoy, towards changing the Pakistani curriculum to focus more on girls, and at the same time sending a meaningful message: “Education makes your daughter stronger !”.

The strong effect of TVC (reaching more than 7 million views on Youtube) has contributed to the Punjab Department of Education to include the new version of the poem in the national education program in more than 5,000 schools in Pakistan.

Since 2018, Lifebuoy has started carrying out awareness campaigns about the importance of education for women in Pakistan.